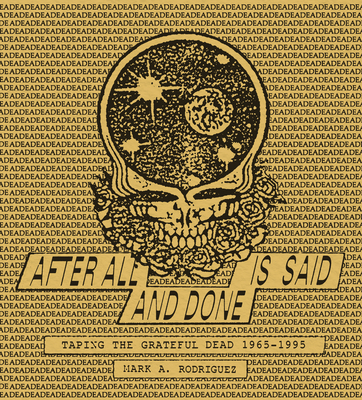 By Mark A. Rodriguez, Stuart Krimko (Foreword by)


Not Available
"A breathtakingly impressive work, After All is Said and Done represents the kind of creative fanaticism that could only come from a Deadhead." - Good Times, 2022 If any one musical act of the rock and roll era can be said to have transcended the simple categorization of "band," the Grateful Dead is it: by the time they stopped performing in 1995, the Dead had become an international institution with a vast backing organization, a massive and devoted fanbase, and archival recordings both official and bootlegged. The cultural significance of these bootlegs--live concert cassettes which solidified the Dead's legendary status even as they occupied a legal gray area for decades--is utterly unique in the annals of music, and the story of their creation, trading, and endless proliferation is a people's history unto itself. Featuring dozens of interviews with tape enthusiasts and members of the Grateful Dead organization as well as the showstopping visuals from hundreds of archival cassette covers, After All Is Said and Done is artist Mark A. Rodriguez's exploration of that history, a saga of homegrown psychedelia, anarchic graphic styles, and black market fandom as written in magnetic tape.