Your Bedroom is an Ocean!: Bring the Sea Home with Reusable, Glow-in-the-Dark (BPA-free!) Stickers of Sharks, Whales, Dolphins, Octopus, Narwhals, and Jellyfish! (Hardcover) 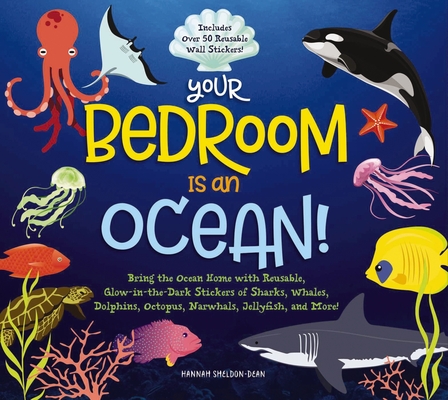 Your Bedroom is an Ocean!: Bring the Sea Home with Reusable, Glow-in-the-Dark (BPA-free!) Stickers of Sharks, Whales, Dolphins, Octopus, Narwhals, and Jellyfish! (Hardcover)


IN STOCK - On Our Shelves Now
Turn your home into an underwater utopia with Your Bedroom Is An Ocean!, a one-of-a-kind craft book filled with everything a young seafarer needs to transform their space into an ethereal ecosystem!

Why look to the sky for mystery and wonder when one of history’s greatest puzzles is right below our noses? Earth’s oceans remain one of the most mystifying entities in existence. Swarming with species that have yet to be identified and housing unique characters like sailors, pirates, and (according to some) aliens, the planet’s waters are one of the remaining frontiers of our modern world. So why wouldn’t children want to immerse themselves in this mystical environment?

Your Bedroom Is An Ocean! gives them that power, making ocean exploration as easy as 1-2-turn the page please! And trust us, these pages are filled to the brim with facts and activities too irresistible to ignore, like…

- The largest ocean is the Pacific, which covers 30% of the Earth’s surface.
- Tsunamis can thunder in at 500 miles per hour, on a good day.
- The water emitting from hydrothermal vents deep beneath the surface can reach up to 750 degrees Fahrenheit.
- The planet’s largest mountain range is not the Andes...it’s the Mid-Oceanic ridge and it’s nearly ten times longer than it’s above-the-surface counterpart, clocking in at a mind-boggling 40,390 miles.
- Have you heard of The Bloop? It’s not a children's TV character; it’s the largest “ocean sound” that has ever been recorded, and it happened in 1997.
- There are over 3 million shipwrecks peppering our ocean floors.
- 91 percent of sea creatures have yet to be discovered, which means marine biologists still have a lot of work to do.

Want more? Don’t worry. As the universe’s largest inhabited space, the world’s oceans have plenty of information to offer, all of which will be folded within the pages of our bubbly book. More than just a textbook, though, Your Bedroom Is An Ocean! is also jam-packed with stunning photographs and textile add-ons like stickers that will help kids and parents alike submerge themselves into this perplexing underwater adventure.
Hannah Sheldon-Deane is a writer, editor, and educator specializing in publications for children and young adults. She has written several activity books, nonfiction titles, and gift books with Penguin Young Readers and Whalen Book Works, and she writes and edits fiction, nonfiction, and educational materials for a variety of outlets. She is also a staff writer and editor at the Child Mind Institute and a volunteer mentor with Girls Write Now in New York City. Hannah received a Master’s of Social Work from New York University and a BA in Literary Arts and Education Policy from Brown University, and she loves to work on projects that fall at the intersection of those fields. She lives in Brooklyn but grew up in Vermont, so you might see her wandering the city in search of pine trees, mourning doves, caterpillars, or whatever other bits of nature she can find. She also loves singing with her choir, baking bread, and dreaming about the animal sanctuary she’ll open someday. Find her at www.hannahsheldon-dean.com.