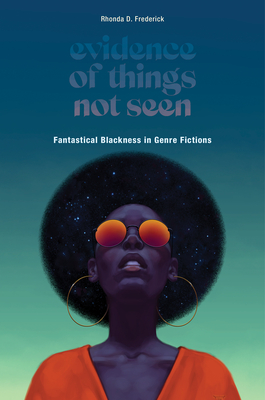 
OUT OF STOCK - Please contact store for expected availability
Evidence of Things Not Seen: Fantastical Blackness in Genre Fictions is an interdisciplinary study of blackness in genre literature of the Americas. The “fantastical” in fantastical blackness is conceived by an unrestrained imagination because it lives, despite every attempt at annihilation. This blackness amazes because it refuses the limits of anti-blackness. As put to work in this project, fantastical blackness is an ethical praxis that centers black self-knowledge as a point of departure rather than as a reaction to threatening or diminishing dominant narratives. Mystery, romance, fantasy, mixed-genre, and science fictions’ unrestrained imaginings profoundly communicate this quality of blackness, specifically here through the work of Barbara Neely, Colson Whitehead, Nalo Hopkinson, and Colin Channer. When black writers center this expressive quality, they make fantastical blackness available to a broad audience that then uses its imaginable vocabularies to reshape extra-literary realities. Ultimately, popular genres’ imaginable possibilities offer strategies through which the made up can be made real.

RHONDA FREDERICK is an associate professor of African and African diaspora studies and English at Boston College in Massachusetts. She is the author of "Colón Man a Come": Mythographies of Panama Canal Migration.
"With the brilliance of James Baldwin's cultural criticism as a conceptual frame, Frederick's 'fantastical blackness' defies the limitations offered by colonial attempts at diminishing African subjectivities. Instead, Frederick shows us how Black writers of fantastical blackness explore the contours of African identities made possible without the dehumanization of the colonial project. This contribution to scholarship on Black speculative fiction is a tour de force, for sure."
— Meredith Gadsby

"Evidence of Things Not Seen is a thoughtful and welcome examination of contemporary Black fantastic literature that expands our understanding of the liberatory ways that Black authors creatively imagine and write against the ongoing perniciousness of global anti-blackness."
— Michelle D. Commander