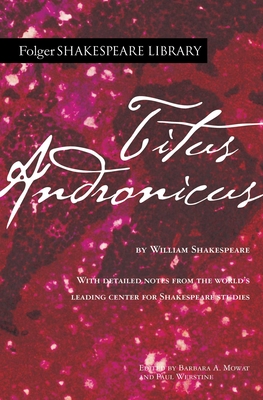 
OUT OF STOCK - Please contact store for expected availability
The authoritative edition of Titus Andronicus from The Folger Shakespeare Library, the trusted and widely used Shakespeare series for students and general readers.

Titus Andronicus is the earliest tragedy and the earliest Roman play attributed to Shakespeare. Titus, a model Roman, has led twenty-one of his twenty-five sons to death in Rome’s wars; he stabs another son to death for what he views as disloyalty to Rome. Yet Rome has become “a wilderness of tigers.” After a death sentence is imposed on two of his three remaining sons, and his daughter is raped and mutilated, Titus turns his loyalty toward his family.

Aaron the Moor, a magnificent villain and the empress’s secret lover, makes a similar transition. After the empress bears him a child, Aaron devotes himself to preserving the baby. Retaining his thirst for evil, he shows great tenderness to his little family—a tenderness that also characterizes Titus before the terrifying conclusion.

This edition includes:
-Freshly edited text based on the best early printed version of the play
-Full explanatory notes conveniently placed on pages facing the text of the play
-Scene-by-scene plot summaries
-A key to the play’s famous lines and phrases
-An introduction to reading Shakespeare’s language
-An essay by a leading Shakespeare scholar providing a modern perspective on the play
-Fresh images from the Folger Shakespeare Library’s vast holdings of rare books
-An annotated guide to further reading