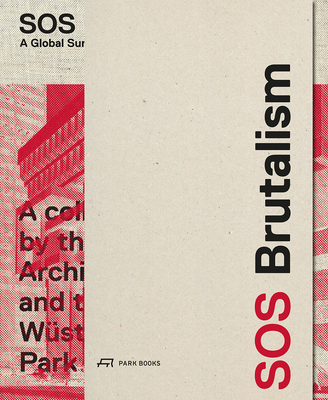 NOT AVAILABLE
Widely disliked in their heyday and only recently beginning to be appreciated, brutalist buildings around the world are at risk of being lost—in many cases to demolition, and in some to insensitive reconstructions that would forever alter buildings’ appearance beyond recognition. SOS Brutalism is a distress signal, an attempt to galvanize public awareness of the architectural heritage that is at risk of being forever lost. The book, result of a major collaborative research undertaking by Deutsches Architektur Museum DAM and Wüstenrot Foundation, presents a global survey of brutalist architecture of the 1950s, ’60s, and ’70s, covering around 120 key buildings from the period from around the world, many of them little-known and in imminent danger of destruction. Case studies of hotspots such as the Macedonian capital Skopje or New Haven, Connecticut, and essays on the history and theory of brutalism round out this groundbreaking and lavishly illustrated book.

“SOS Brutalism demonstrates the richness and diversity of the style. . . . [Brutalist buildings] collectively represent a post–World War II moment of experimentation with form and new materials, something that is worth protecting.”
— Hyperallergic

“A treasure trove of unsung buildings and oddities. . . . Covering the period between 1950 and 1970, SOS Brutalism uses new photography and archive imagery to rally for preservation and recognition, making it a must for lovers of architecture’s more far-flung fringes. Lovers of raw surfaces, bold forms,and naked concrete are spoilt for choice.”
— Wallpaper

“Save the concrete monsters: That’s the unofficial rallying cry of SOS Brutalism. . . . The scope of the survey is staggering: more than 750 pages, it spotlights projects from around the globe, focusing especially on a handful of case studies, among them churches, British universities, and Japanese civic halls. . . . The book represents a significant contribution to charting the global rise of this period of architecture and what remains of that legacy.”
— Architect magazine

“Brutalism has become a fad and fascination for design nerds, and SOS Brutalism does not disappoint. . . . Begun as a hashtag, #SOSBrutalism sought to draw awareness to the fact that these formerly derided, now-fashionable buildings are not registering on the radar of traditional architectural preservationists, even though many are in danger of being razed. Sending out an SOS to the world, . . . Elser, Kurz, and Schmal have collected over one thousand edifices from nearly every continent. . . . The book showcases 120 significant projects.”

“Solid and impeccably researched but also very engaging and illustrated with plenty of contemporary images and archive documents.”
— We Make Money Not Art

“To some, Brutalist buildings are eyesores, monstrosities. But Elser, Kurz, and Schmal believe Brutalism is an architectural style worthy of preservation—and have created an online campaign, book and exhibition to that end.”
— BBC Culture

“The ultimate global survey.”
— Domus, on the exhibition

“SOS Brutalism calls for recognition and understanding of the buildings that contribute to a global heritage, which is being lost as individual examples fall into disrepair and sometimes demise. . . . [It’s] a weighty reminder of our collective legacy.”
— Architectural Record

"Widely disliked in their heyday and only recently beginning to be appreciated, brutalist buildings around the world are at risk of being lost.... SOS Brutalism is a distress signal, an attempt to galvanize public awareness of the architectural heritage that is at risk of being forever lost.... [The book] admirably balances the visual and historical qualities of architectural publishing, presenting dozens of buildings around the world...through photos and drawings, with intelligent texts on the characteristics of Brutalism in different contexts as well as on the individual projects themselves."
— A Daily Dose of Architecture Books