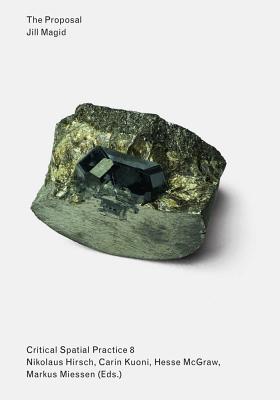 The eighth volume of the Critical Spatial Practice series focuses on Jill Magid's "The Barrag n Archives," a multiyear project that examines the legacy of Pritzker Prize-winning architect Luis Barrag n (1902-1988), and questions forms of power, public access, and copyright that construct artistic legacy. The archive of Barrag n was split in two after his death--the personal archive is kept in his home in Mexico, which is now a museum and UNESCO World Heritage Site; while his professional archive was purchased in 1995 by Rolf Fehlbaum, chairman of the Swiss furniture company Vitra, from a New York gallerist. It is said that Fehlbaum bought it as a gift for his then fianc e, Federica Zanco. She is the director of the Barragan Foundation, which also holds rights to Barrag n's name. For the past twenty years the archive, housed below the Vitra headquarters, has been inaccessible to the public.

With The Proposal Magid attempts to bring together Barrag n's professional and personal archives by probing the architect's official and private selves, and the interests of various individuals and governmental and corporate entities who have become the archives' guardians. Magid, with permission of the Barrag n family, commissioned a small amount of Barrag n's cremated remains to be transformed into a diamond. The stone, set in a gold ring, was offered to Zanco in exchange for the return of the professional archive to Mexico. Magid's artwork directly engages the intersections of the psychological and the judicial, national identity and repatriation, international property rights and copyright law, authorship and ownership, the human body and the body of work.