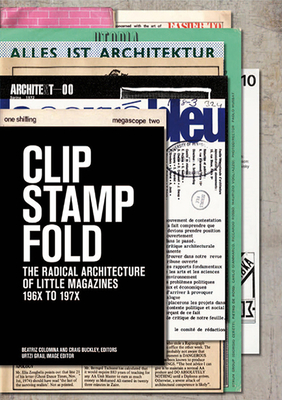 
Out of Stock - Please contact store for availability and price
An explosion of little architectural magazines in the 1960s and 1970s instigated a radical transformation in architectural culture, as the magazines acted as a site of innovation and debate. Clip/Stamp/Fold takes stock of seventy little magazines from this period. The book brings together a remarkable range of documents and original research which the project has produced during its continuous travels over the last four years starting with the exhibition at the Storefront in November 2006. The book features transcripts from the "Small Talks" events in which editors and designers were invited to discuss their magazines; a stocktaking of over 100 significant issues that tracks the changing density and progression of the little magazine phenomenon; transcripts of more than forty interviews with magazine editors and designers from all over the world; a selection of magazine facsimiles; and a fold out poster that offers a mosaic image of more than 1,200 covers examined during the research.