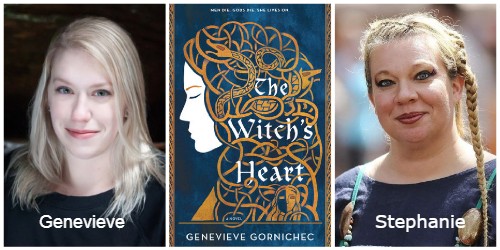 Of Vikings and Myths, with Author Genevieve Gornichec

Find out what Vikings were really like! Join us for an evening “around the fire” with author Genevieve Gornichec, who will speak with us about her debut novel The Witch's Heart (publishes 2/9/21). Genevieve will be in lively conversation with Stephanie Moffet of Dragon's Head Productions and our bookseller Lizy Coale.

Gift with purchase! Pre-order The Witch's Heart by January 29 to receive a hand-woven 100% wool bookmark. Bookseller Lizy Coale loves this book so much, she was inspired to create the bookmark using the author's own design which is based on Viking Age archeological finds. Check it out here.

This event will be held on Zoom. Advance registration is required.

Genevieve Gornichec earned her degree in history from The Ohio State University, but she got as close to majoring in Vikings as she possibly could, and her study of the Norse myths and Icelandic sagas became her writing inspiration. She lives in Cleveland, Ohio. The Witch's Heart is her debut novel.

When a banished witch falls in love with the legendary trickster Loki, she risks the wrath of the gods in this moving, subversive debut novel that reimagines Norse mythology.

Angrboda's story begins where most witches' tales end: with a burning. A punishment from Odin for refusing to provide him with knowledge of the future, the fire leaves Angrboda injured and powerless, and she flees into the farthest reaches of a remote forest. There she is found by a man who reveals himself to be Loki, and her initial distrust of him transforms into a deep and abiding love.

Their union produces three unusual children, each with a secret destiny, who Angrboda is keen to raise at the edge of the world, safely hidden from Odin's all-seeing eye. But as Angrboda slowly recovers her prophetic powers, she learns that her blissful life--and possibly all of existence--is in danger.

With help from the fierce huntress Skadi, with whom she shares a growing bond, Angrboda must choose whether she'll accept the fate that she's foreseen for her beloved family...or rise to remake their future. From the most ancient of tales this novel forges a story of love, loss, and hope for the modern age.

When a banished witch falls in love with the legendary trickster Loki, she risks the wrath of the gods in this moving, subversive national bestselling debut novel that reimagines Norse mythology.