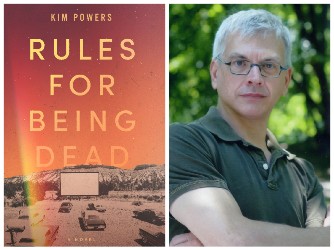 Let us bring authors to your living room via Zoom! Our next author in the Reader Meet Writer series is Kim Powers, who will talk with us about his novel Rules for Being Dead (buy the book here).

Kim will be in conversation with author Louis Bayard (Courting Mr. Lincoln, The Black Tower, and others).

Kim Powers is a two-time Emmy winner and author of the novels Capote in Kansas and Dig Two Graves, as well as the memoir The History of Swimming, a Barnes & Noble Discover Award winner and Lambda Literary Award finalist for Best Memoir of the Year. He also wrote the screenplay for the festival-favorite indie film Finding North and the new play Sidekicked, a "one broad comedy" about Vivian Vance. Powers is the Senior Writer for ABC's 20/20, part of the team that has received three consecutive Edward R. Murrow Awards. A native Texan, he received an MFA from the Yale School of Drama. In 2007, he was selected by Out Magazine for the influential "Out 100" list. He lives in Manhattan and Asbury Park, NJ.

In a story that's both cagey and unfailingly entertaining, Powers explores life's deepest questions and most profound mysteries. Only a writer this in touch with his own humanity could populate a novel with characters who, despite their flaws, failures, and eccentricities, are humane and good. --Wally Lamb, author of I Know This Much Is True

Kim Powers writes a glorious novel about a boy and his journey to feel whole after the mysterious death of his mother. Mr. Powers' prose is artful and searing as Clarke's story unfolds in a Texas town so vivid, the reader is there. Secrets are revealed, hope is lost and found, and redemption awaits in this beautifully rendered tale about love and loss, and the courage to face the truth with an open heart. --Adriana Trigiani, New York Times bestselling author of Tony's Wife

It's the late 1960s in McKinney, Texas. At the downtown theater and the local drive-in, movies James Bond, My Fair Lady, Alfie, and Dr. Zhivago feed the dreams and obsessions of a ten-year-old Clarke who loves Audrey, Elvis, his family, and the handsome boy in the projector booth. Then Clarke loses his beloved mother, and no one will tell him how she died. No one will tell her either. She is floating above the trees and movie screens of McKinney, trapped between life and death, searching for a glimpse of her final moments on this earth. Clarke must find the shattering truth, which haunts this darkly humorous and incredibly moving novel.

Rules for Being Dead (Hardcover)

"Kim Powers's haunting and spellbinding novel Rules for Being Dead reads like an intoxicating blend of the best of Shirley Jackson, Alice Sebold and Fannie Flagg." --STARRED Review, Shelf Awareness