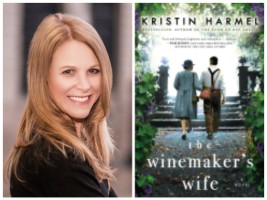 THIS IS EVENT IS SOLD OUT

Copperfish Books is pleased to present a very special event with international bestselling author Kristin Harmel at The Orange House Wine Bar on Monday, November 11 from 6 to 8 pm. Kristin will speak about her latest novel, The Winemaker's Wife, published by Gallery Books/Simon & Schuster, and she'll be happy to sign copies of her books. We'll have some of her earlier books available for sale.

Admission for one is $45 and admission for two is $70. Ticket price includes one hardcover copy of The Winemaker's Wife, a buffet of appetizers, a glass of sparkling wine per person, and of course the opportunity to meet the author. A cash bar will be available for additional beverages.

<<< Tickets can be purchased online HERE or at the bookstore. >>>

The Winemaker's Wife is a moving story set amid the champagne vineyards of northern France during the darkest days of World War II.

Champagne, 1940: Inès has just married Michel, the owner of storied champagne house Maison Chauveau, when the Germans invade. As the danger mounts, Michel turns his back on his marriage to begin hiding munitions for the Résistance. Inès fears they'll be exposed, but for Céline, half-Jewish wife of Chauveau's chef de cave, the risk is even greater--rumors abound of Jews being shipped east to an unspeakable fate.

When Céline recklessly follows her heart in one desperate bid for happiness, and Inès makes a dangerous mistake with a Nazi collaborator, they risk the lives of those they love--and the champagne house that ties them together.

New York, 2019: Liv Kent has just lost everything when her eccentric French grandmother shows up unannounced, insisting on a trip to France. But the older woman has an ulterior motive--and a tragic, decades-old story to share. When past and present finally collide, Liv finds herself on a road to salvation that leads right to the caves of the Maison Chauveau.

Kristin Harmel is a #1 international bestselling novelist whose books have been translated into numerous languages and are sold all over the world. A former reporter for PEOPLE magazine, Kristin has also freelanced for many other publications, including American Baby, Men’s Health, Glamour, Woman’s Day, Travel + Leisure, and more.

Her previous novels include The Room on Rue Amelie, When We Meet Again, The Life Intended, and The Sweetness of Forgetting – all international bestsellers.

Kristin grew up in Peabody, Mass.; Worthington, Ohio; and St. Petersburg, Fla., and she graduated with a degree in journalism from the University of Florida. After spending time living in Paris, she now lives in Orlando, Fla., with her husband and young son. She enjoys traveling (especially to France!), reading, cooking, wine tasting, and hanging out at Walt Disney World.

“Love and betrayal, forgiveness and redemption combine in a heady tale of the ever-present past…fantastic!” —Pam Jenoff, New York Times bestselling author of The Lost Girls of Paris

The author of the “engrossing” (