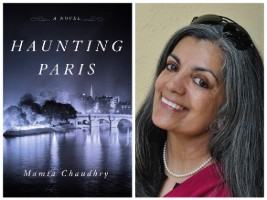 Join us on January 15 at 6 pm to hear author Mamta Chaudhry talk about her debut historical novel Haunting Paris (published by Random House). Mamta will be pleased to sign copies of her book after her talk.

Haunting Paris is a timeless story of love and loss takes a mysterious turn when a bereaved pianist discovers a letter among her late lover's possessions, launching her into a decades-old search for a child who vanished in the turbulence of wartime Paris. Mamta Chaudhry's profoundly moving debut matches emotional intensity with lyrical storytelling to explore grief, family secrets, and the undeniable power of memory, while using vivid imagery and deep historical understanding to capture a city in breathtaking new ways.

Mamta Chaudhry lives with her husband in Coral Gables, Florida, and they spend part of each year in India and in France. Much of her professional career was in television and classical radio at stations in Calcutta, Gainesville, Dallas, and Miami. Mamta has studied with Marilynne Robinson and has also taught literature and creative writing at the University of Miami. Her early fiction, poetry, and feature articles have been published in newspapers and magazines in the States and in India. She is currently working on a second novel.

Paris, 1989:  Alone in her luminous apartment on Île Saint-Louis, Sylvie discovers a mysterious letter among her late lover Julien’s possessions, launching her into a decades-old search for a child who vanished in the turbulence of the Second World War.