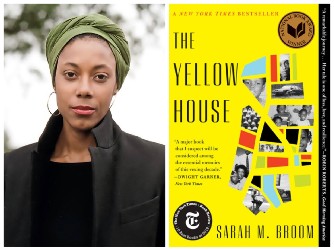 Let us bring authors to your living room via Zoom!  Our next author in the series is Sarah M. Broom, who will talk with us about her memoir The Yellow House (buy the book here).

Sarah will be in conversation with Imani Perry, who  is the Hughes-Rogers Professor of African American Studies at Princeton University and a faculty associate with the Programs in Law and PublicAffairs, Gender and Sexuality Studies and Jazz Studies. She is the author of six books, including Looking for Lorraine: The Radiant and Radical Life of Lorraine Hansberry.

Sarah M. Broom is a writer whose work has appeared in the New Yorker, The New York Times Magazine, The Oxford American, and O, The Oprah Magazine among others. A native New Orleanian, she received her Masters in Journalism from the University of California, Berkeley in 2004. She was awarded a Whiting Foundation Creative Nonfiction Grant in 2016 and was a finalist for the New York Foundation for the Arts Fellowship in Creative Nonfiction in 2011. She has also been awarded fellowships at Djerassi Resident Artists Program and The MacDowell Colony. She lives in New York state.

Sarah M. Broom's The Yellow House tells a hundred years of her family and their relationship to home in a neglected area of one of America's most mythologized cities. This is the story of a mother's struggle against a house's entropy, and that of a prodigal daughter who left home only to reckon with the pull that home exerts, even after the Yellow House was wiped off the map after Hurricane Katrina.

Winner of the 2019 National Book Award in Nonfiction

A brilliant, haunting and unforgettable memoir from a stunning new talent about the inexorable pull of home and family, set in a shotgun house in New Orleans East.