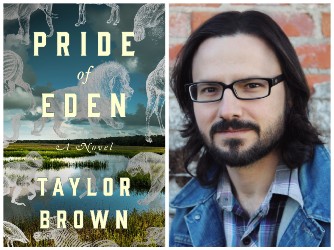 We are excited to offer a special opportunity to bring an author virtually into your living room via Zoom through a new program we are testing through our Southern Independent Booksellers Alliance. Our first author, Taylor Brown,. will be talking with us about his newest book Pride of Eden and answering your questions. We hope Taylor is the first of many authors we’ll be bringing into your living room.

So, please do plan to join us via the internet on March 31 at 3 pm.

“Pride of Eden is a beautifully written, visionary novel of scarred souls seeking redemption not only for themselves but, in their limited way, for us all. Taylor Brown is clearly one of the best American writers of his generation. We are fortunate to have his voice in these dark times.”—Ron Rash, author of Serena and Eureka Mill

Attendance is limited to 100 people.

If you elect to attend, we will email you on Tuesday morning the link to attend this virtual event followed by the password you will need to enter.  Happy Reading!

Retired racehorse jockey and Vietnam veteran Anse Caulfield rescues exotic big cats, elephants, and other creatures for Little Eden, a wildlife sanctuary near the abandoned ruins of a failed development on the Georgia coast. But when Anse’s prized lion escapes, he becomes obsessed with replacing her—even if the means of rescue aren’t exactly legal.

Anse is joined by Malaya, a former soldier who hunted rhino and elephant poachers in Africa; Lope, whose training in falconry taught him to pilot surveillance drones; and Tyler, a veterinarian who has found a place in Anse’s obsessive world.

From the rhino wars of Africa to the battle for the Baghdad Zoo, from the edges of the Okefenokee Swamp to a remote private island off the Georgia coast, Anse and his team battle an underworld of smugglers, gamblers, breeders, trophy hunters, and others who exploit exotic game.

PRIDE OF EDEN is Taylor Brown's brilliant fever dream of a novel: set on the eroding edge of civilization, rooted in dramatic events linked not only with each character’s past, but to the prehistory of America, where great creatures roamed the continent and continue to inhabit our collective imagination.

Taylor Brown grew up on the Georgia coast. He has lived in Buenos Aires, San Francisco, and the mountains of western North Carolina. He is the recipient of the Montana Prize in Fiction and a finalist for the Southern Book Prize. His novels include Fallen Land, The River of Kings, and Gods of Howl Mountain. He lives in Savannah, Georgia.

Pride of Eden: A Novel (Hardcover)

The enthralling new novel from the acclaimed author of Fallen Land, The River of Kings, and Gods of Howl Mountain

An Indie Next pick, an Okra 2016 Winter Selection, and a SIBA Bestseller!

The River of Kings: A Novel (Paperback)