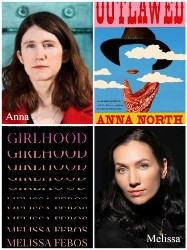 SORRY, THIS EVENT HAS BEEN CANCELED (9/1)

Let us bring authors to your living room via Zoom!  For our next event in the series, Anna North, author of Outlawed, will be in conversation with Melissa Febos, author of Girlhood.

North’s novel dusts off the myth of the old west and reignites the promise of the frontier with an entirely new set of feminist stakes. It’s been described as “The Crucible meets True Grit in this riveting adventure story of a fugitive girl, a mysterious gang of robbers, and their dangerous mission to transform the Wild West.”

Febos' book of essays examines the narratives women are told about what it means to be a girl and the realities of growing up female in a world that prioritizes the feelings, perceptions, and power of men at girls' expense. Carmen Maria Machado praises Girlhood, “These essays are moss and iron-hard and beautiful-and struck through with Febos' signature brilliance and power and grace. An essential, heartbreaking project.”

Pull up a chair and listen to these authors discuss where Outlawed meets Girlhood!

*If you elect to attend, we will email you on morning of the event with the link and password to attend this virtual event.*

Anna North is a graduate of the Iowa Writers’ Workshop and the author of two previous novels, America Pacifica and The Life and Death of Sophie Stark, which received a Lambda Literary Award in 2016. She has been a writer and editor at Jezebel, BuzzFeed, Salon, and the New York Times, and she is now a senior reporter at Vox. She grew up in Los Angeles and lives in Brooklyn.

Melissa Febos is the author of Whip Smart and Abandon Me, a Lambda Literary Award finalist and Publishing Triangle Award finalist. Her essays have appeared in Tin House, The Believer, The New York Times, and elsewhere. Febos is the inaugural winner of the Jeanne Córdova Prize for Lesbian/Queer Nonfiction from Lambda Literary and serves on the directorial board of VIDA: Women in Literary Arts. She is an associate professor of creative writing at Monmouth University and lives in Brooklyn.

"Reader, you are in for a real treat." - Jenny Zhang

The Crucible meets True Grit in this riveting adventure story of a fugitive girl, a mysterious gang of robbers, and their dangerous mission to transform the Wild West.

For readers of Maggie Nelson and Leslie Jamison, a poignant, universal story of the forces that shape girls, and of an America where women are rarely free to define themselves.