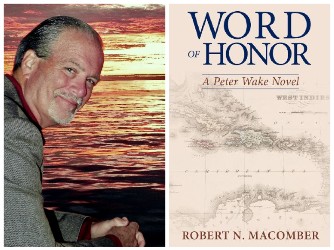 Please join us for a very special Zoom virtual event with author and friend of Copperfish Books, Robert N. Macomber!

We're celebrating the launch of #15 in his Honor Series, Word of Honor: A Peter Wake Novel. Many of you have been eagerly waiting this book -- it's almost here!

IMPORTANT: To receive your signed and personalized copy of Word of Honor, you must pre-order the book from us by Friday, October 2. Robert will stop by our store to sign the books before our event.

Robert N. Macomber is an award-winning author, internationally acclaimed speaker, former Department of Defense consultant/lecturer, and accomplished seaman. When not trekking the world for research, book signings, or lectures, he lives on an island in southwest Florida, where he enjoys cooking foreign cuisines from his books and sailing among the islands. Visit his website at www.RobertMacomber.com.

As part of the award-winning Honor Series of historical naval novels, Word of Honor is the personal memoir of Captain Peter Wake, a veteran of espionage operations for the Office of Naval Intelligence who also has considerable sea and combat experience.

At the beginning of this third book of the Spanish-American War Trilogy, it is three years after the war, and Wake is called in to explain his decisions and actions in the Caribbean during the wartime summer of 1898; when American sailors, Marines, and soldiers landed in eastern Cuba before Puerto Rico.

As he briefs his interrogators, Wake recalls surviving two major land battles and a climatic sea battle near Cuba, then taking command of auxiliary cruiser Dixon, which is manned with regular and reservist officers and men. Wake soon tackles enemy blockade-runners, participates in the invasion of Puerto Rico, encounters war hero and future president Theodore Roosevelt, and pursues an elusive Spanish ocean raider on the loose somewhere in the Caribbean.

As the story unfolds, Wake realizes the inquiry is the result of enemies inside the Navy trying to ruin his reputation and thwart his impending retirement pension. Beginning to understand who they are, what all they have done, and the consequences he is facing, he nevertheless continues to narrate what really happened that fateful summer.

Word of Honor is about the stress of making decisions in a wartime command. The many facets touched include the personal and professional relationships between a new captain and his officers, never-ending logistical and disciplinary problems, the necessity for initiative and innovation, dealing with superiors and hostile peer captains, the labyrinth of egos and political infighting at headquarters, and the grit you need to get through it all, while maintaining your word of honor.

Word of Honor is the fifteenth book in the award-winning Honor Series of historical naval novels.