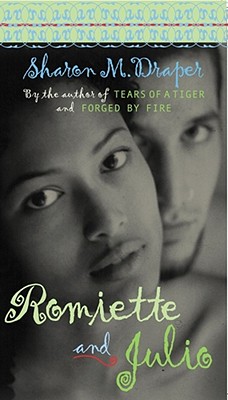 
OUT OF STOCK - Please contact store for expected availability
Star Crossed Lovers
When Romiette Cappelle meets Julio Montague, she feels as though she has met the soul mate who can rescue her from her recurring nightmare about fire and water. But like the Shakespearean characters whose names echo theirs, Romiette and Julio discover that not everyone approves of their budding romance. In their case, it is because Romiette is African-American and Julio is Hispanic, and the Devildogs, a dangerous local gang, violently oppose their interracial relationship.
When the Devildogs threaten to teach them a lesson, Romiette and Julio come up with a risky plan to escape from the gang's fearsome shadow. But things go terribly awry, and the two find themselves caught up in a deadly reality more frightening that Romiette's nightmare -- and in a desperate struggle to avoid the tragic fate of Shakespeare's famous young lovers.
Sharon M. Draper is a three-time New York Times bestselling author and a recipient of the Margaret A. Edwards Award honoring her significant and lasting contribution to writing for teens. She has received the Coretta Scott King Award for both Copper Sun and Forged by Fire and was awarded the Charlotte Huck Award for Stella by Starlight. Her novel Out of My Mind has won multiple awards and was a New York Times bestseller for over three years, and Blended has also been a New York Times bestseller. She taught high school English for twenty-five years and was named National Teacher of the Year. She now lives in Florida. Visit her at SharonDraper.com.