Among a Thousand Fireflies (Paperback) 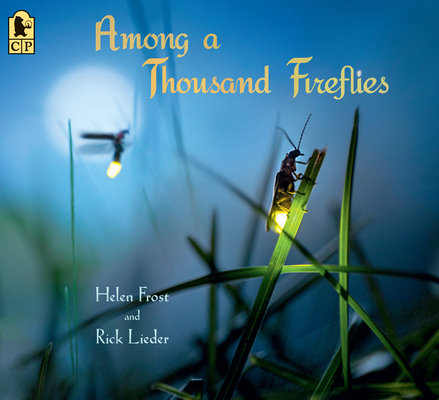 Among a Thousand Fireflies (Paperback)

By Helen Frost, Rick Lieder (Illustrator)
List Price: $7.99
Our Price: $6.99
(Save: $1.00 13%)
On Our Shelves Now
How can a firefly find the one, among so many? Exquisite photographs and poetic text evoke a sense of mystery and magic.

On a summer evening, just as the stars blink on, a firefly lands on a flower. Lights start to flash all around her — first one, then three, seven. Hundreds. Thousands. How will she find just one flash among them? And will he see her flash in return? In evocative photographs and lyrical language, Rick Lieder and Helen Frost, creators of the critically acclaimed Step Gently Out and Sweep Up the Sun, offer a true story of how two fireflies come together after finding each other’s light among thousands of others.
Helen Frost is the author of Step Gently Out and Sweep Up the Sun, as well as several other award-winning books for children and young adults. She lives in Fort Wayne, Indiana.

Rick Lieder is a photographer, painter, and illustrator and is the photographer for Step Gently Out and Sweep Up the Sun. He lives in Michigan.
In Frost and Lieder's third exploration of tiny creatures taken for granted in the natural world (Sweep Up the Sun, 2015, etc.), they top themselves, lyrically centering on a firefly's search for a mate. Again, Frost's spare poem weds seamlessly with Lieder's transfixing photography...Another thrilling collaboration, showing children of all ages that even Earth's littlest creatures long for connection.
—Kirkus Reviews (starred review)

This simple, delightful story of two fireflies finding each other among thousands is sure to enchant children...Written in verse, the text is lyrical yet simple enough for even the youngest readers to enjoy and short enough to be shared aloud in a group setting. The photographs are breathtaking, with close-ups of fireflies flashing in the night, and complement the dreamlike tone. Panoramic shots of a forest filled with flashes provide different perspectives. Educators hoping to tie this book to science curricula will appreciate the note at the end, which offers a scientific explanation of how a firefly’s flashes function in the wild. This enthralling look at fireflies will be enjoyed by all who read it.
—School Library Journal (starred review)

The blend of science, gentle poetry, and spectacular photography will make children long for a warm summer night perfect for firefly gazing.
—The Horn Book

The straightforward, pleasant lines, coupled with Lieder’s stunning, close-up, twilight photography, make an engaging and beautiful introduction to the world of fireflies. Although intended for a younger audience, the factual information at the close of the duo’s impressive presentation encourages broader reader appeal.
—Booklist