Florida's Rivers: A Celebration of Over 40 of the Sunshine State's Dynamic Waterways (Hardcover) 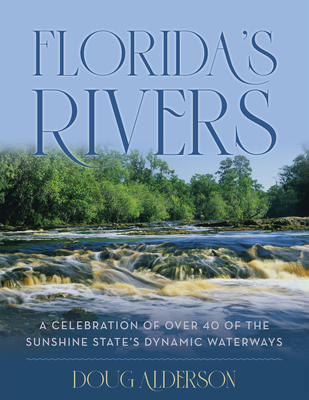 Florida's Rivers: A Celebration of Over 40 of the Sunshine State's Dynamic Waterways (Hardcover)


IN STOCK - On Our Shelves Now
The rivers in Florida are steeped in a rich natural and cultural history. They are avenuesthrough time, allowing us to wrap ourselves in a rich historical tapestry, and they are showcases for wildlife and natural beauty. On some rivers, idyllic scenes are revealed bend after bend for miles and sometimes days, appearing to have changed little since early native people plied the waters in dugout canoes. Imagine gliding along a clear watercourse beneath a leafy canopy of maple, cypress, and gum. The current swirls eelgrass in undulating patterns as schools of silvery mullet shoot past. Ahead, a manatee's snout breaks the surface in a loud whoosh, its gray body lumbering slowly along and showing little fear as you pass by. A red-shouldered hawk cries and soars over treetops while a black anhinga stretches long wings to dry while perched on a cypress knee. Whether you are viewing a river from the land or, especially, a kayak, canoe, or paddleboard, let Florida's Rivers be your guide to celebrating the state's treasures.
Doug Alderson is the author of several books, including America's Alligator, Wild Florida Waters, Waters Less Traveled, New Dawn for the Kissimmee River, Encounters with Florida's Endangered Wildlife and A New Guide to Old Florida Attractions, which the Florida Writers Association placed in the top five of published books for 2017. He has won four first place Royal Palm Literary awards for travel books and several other state and national writing and photography awards. Additionally, his articles and photographs have been featured in numerous magazine. Doug received the inaugural Environmental Service Award by Paddle Florida in 2015 "for conspicuous commitment, unflagging dedication and love of Florida's natural environment." For several years, he coordinated Florida's designated paddling trail system and helped to establish the 1,515-mile Florida Circumnavigational Saltwater Paddling Trail. He is currently the Outreach and Advocacy Director for Apalachicola Riverkeeper.