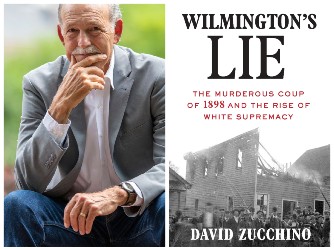 Let us bring authors to your living room via Zoom! Our next event in the Reader Meet Writer series is with David Zucchino, who will talk with us about his new book Wilmington's Lie: The Murderous Coup of 1898 and the Rise of White Supremacy (buy the book here).

If you elect to attend, we will email you on morning of the event with the link to attend this virtual event.

David Zucchino is a contributing writer for The New York Times. He has covered wars and civil conflicts in more than three dozen countries. Zucchino was awarded a Pulitzer Prize for his dispatches from apartheid South Africa and is a four-time Pulitzer Prize finalist for his reporting from Iraq, Lebanon, Africa, and inner-city Philadelphia. He is the author of Thunder Run and Myth of the Welfare Queen.

"A judicious and riveting new history...The publication of a book like Zucchino's, [is] a sign that, however late and reluctantly, America is becoming conscious of the racial violence that insured white supremacy after Reconstruction."--New Yorker

"Brilliant...Zucchino, a contributing writer for the New York Times, does not overwrite the scenes. His moral judgement stands at a distance. He simply describes what happened and the lies told to justify it all...The details contained in the last part of the book are heart-wrenching. With economy and a cinematic touch, Zucchino recounts the brutal assault on black Wilmington."--New York Times

"In Wilmington's Lie, David Zucchino, a Pulitzer Prize-winning journalist who has covered conflicts around the world, punctures the myths surrounding the insurrection and provides a dynamic and detailed account of the lives of perpetrators and victims...Deeply researched and profoundly relevant, Wilmington's Lie explains how [the coup] happened and suggests how much work remains to be done to come to terms with what took place."--Washington Post

By 1898 Wilmington, North Carolina, was a shining example of a mixed-race community-a bustling port city with a thriving African American middle class and a government made up of Republicans and Populists, including black alderman, police officers, and magistrates. But across the state-and the South-white supremacist Democrats were working to reverse the advances made by former slaves and their progeny. They were plotting to take back the state legislature in the November 8th election and then use a controversial editorial published by black newspaper editor Alexander Manly to trigger a "race riot" to overthrow the elected government in Wilmington. With a coordinated campaign of intimidation and violence, the Democrats sharply curtailed the black vote and stuffed ballot boxes to steal the 1898 mid-term election. Two days later, more than 2,000 heavily armed white nightriders known as Red Shirts swarmed through Wilmington, terrorizing women and children and shooting at least sixty black men dead in the streets. The rebels forced city officials and leading black citizens to flee at gun point while hundreds of local African Americans took refuge in nearby swamps and forests. This brutal insurrection is the only violent overthrow of an elected government in U.S. history. It halted gains made by blacks and restored racism as official government policy, cementing white rule for another seventy years. It was not a "race riot" as the events of November 1898 came to be known, but rather a racially-motivated rebellion launched by white supremacists. In Wilmington's Lie, David Zucchino uses contemporary newspaper reports, diaries, letters, and official communications to create a gripping narrative that weaves together individual stories of hate, fear, and brutality. This is a dramatic and definitive account of a remarkable but forgotten chapter of American history.

Wilmington's Lie: The Murderous Coup of 1898 and the Rise of White Supremacy (Hardcover)

From Pulitzer Prize-winner David Zucchino comes a searing account of the Wilmington riot and coup of 1898, an extraordinary event unknown to most Americans