Agony of the Leaves (A Tea Shop Mystery #13) (Mass Market) 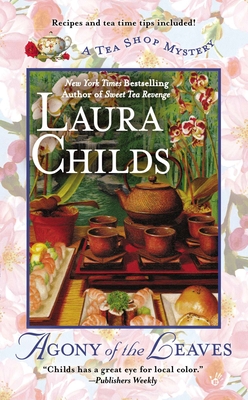 Agony of the Leaves (A Tea Shop Mystery #13) (Mass Market)

This is book number 13 in the A Tea Shop Mystery series.

In the latest novel from the New York Times bestselling author of Scones & Bones, Indigo Tea Shop owner Theodosia Browning finds herself in hot water when a body surfaces at the grand opening of Charleston’s Neptune Aquarium…

The opening of the aquarium is a major Charleston event, and Theodosia has been hired to cater the private party to honor dignitaries and big-buck donors. Things are going swimmingly—until Theodosia discovers a body entangled in a net, drowned in one of the aquarium’s state-of-the-art tanks.

To make matters worse, the victim is Theodosia’s former boyfriend, Parker Scully. The EMTs think Parker’s drowning was an accident, but when Theodosia notices what look like defense wounds on his hands, she realizes that someone wanted Parker dead. The police aren’t keen on her theory, so if she wants Parker’s killer brought to justice, Theodosia will have to jump into the deep end and start her own investigation…
Laura Childs is the New York Times bestselling author of the Tea Shop Mysteries, the Scrapbooking Mysteries, and the Cackleberry Club Mysteries. She is a consummate tea drinker, scrapbooker, and dog lover, and travels frequently to China and Japan with Dr. Bob, her professor husband. In her past life she was a Clio Award–winning advertising writer and CEO of her own marketing firm.
Praise for Laura Childs:

“Childs has a great eye for local color.”—Publishers Weekly